Moving in and Orientation

This post is from Jan 29, 2013. My views have probably changed since then. If it's about technology, any code is probably broken by this point.

I am still writing about ten fifteen days behind the present, but hopefully I can catch up soon and then get on a regular schedule for posts. This post is about moving in to where I’m living, the orientation for the new international students, and some more insights into the culture and how I’m trying to adapt to it. Hope you like it!

So up until now,  I stayed in the Pilgrimsgard and then the Bruns Botell, both cheaper than most of the hotels around, but still a bad drain on the wallet. While they were both pretty close to the city center, they each had their downsides; the internet in the Pilgrimsgard was flaky, and the room in Bruns was on the fourth floor, with no elevator - not a big deal most of the time, but bringing suitcases up and down was a drag. Neither had a kitchen, and I had them both all to myself - it was pretty lonely! Needless to say, I was excited to move into the apartment, with its kitchen and roommates.

NTNU is divided into several campuses. The largest, Gløshaugen, where the big main building is, houses most of the science and engineering classes. Dragvoll, several miles uphill and to the south, has the majority of the humanities. Other campuses - Valgrinda, Tyholt, Kalvskinnet, Oya - have medicine, music, architecture, and various other studies. Between these campuses lie student villages run by SiT, the student welfare organization, as well as neighborhoods and shops.

http://www.ntnu.edu/map/map-of-ntnu/ highlights the locations of the campuses, although google maps is prettier.

My apartment is in Moholt Student village, about halfway between Gløshaugen and Dragvoll, and Gløshaugen is about that far from the city center, so I grabbed all of my things and took a taxi up to Moholt, got my key from the SiT office, and moved myself in.

My roommates were all still on winter break, so I did not see any of them for several days, but I will describe them here, as it is as good a place as any. Andrew, who has the bedroom next door to me, is from the UK and is a master’s student studying Condensed Matter Physics. Ola, from Nigeria, is studying the same thing, although he is in his first year of his Master’s, where Andrew is in his second. Udhap, from Nepal, is getting his Master’s in Urban Planning. Needless to say, a very interesting group to live with.

The Orientation Days were put on by the office of International Relations, the office that handles all incoming and outgoing studiers abroad. First, we listened to representatives from that office and several other groups tell us about life here at NTNU, in Trondheim, and in Norway in general. Students from several organizations informed us about the different athletic, academic, social, and cultural opportunities available to students. Caring adults told us where to find a doctor or seek counseling or other support if we needed it. Basically, a few hours of everything you need to know to get by here, which was also conveniently printed in the folders we all received.

The information session was followed by a scramble to hand out semester cards to each of us - proof that we were indeed registered for the semester. Picture lots of awkward milling about and forced conversations that seemed to all follow the familiar pattern of “Where are you from? Oh, I’m from… What are you studying? I’m registered for… Okay, maybe I’ll see you around!” in varying levels of English competency. Sprinkle in a few clusters of kids from the same country chattering away in German or Chinese or Latvian. We were all scared and excited, we were all in the same boat - far from friends and family, or anything we know, recently overwhelmed with leaflets and speeches encouraging us to get involved in a hundred different things. Just like college orientation, except we had been through it before, and knew the stages. We knew that everyone would be friendly now, but we wouldn’t necessarily shake out our real friends for another few weeks.

Once we had our semester cards and waited for our new acquaintances to finish getting theirs, we walked to the house of the International Office and had a winter barbecue on the lawn. We ate fishburgers and potato salad and played an old Norwegian game called Kubb (rhymes with tube), where teams of six try to knock down each others wooden blocks with sticks. Like many old and simple games, it was hilarious and entertaining.

After the barbecue and games, we took a trip downtown to the Pirbadet, a large swimming facility by the harbor. I didn’t take any pictures, because I was swimming, but google image search gives you a pretty good sense of it: slides, tubs, pools, diving boards, and huge glass windows overlooking the fjord and the Munkholmen. About a hundred twenty-somethings from all corners of the globe, new to a place, frolicking. If you have seen little kids at the pool, you might understand the confused joy. My favorite parts were the rock wall, where you could climb and then fall back into the pool, and the outdoor jacuzzi, where the bubbles were much colder than the water, as they came from the air, which was freezing.

The second day of Orientation had only one activity, a hike, and in ways that the first day couldn’t, communicated what it meant to be a student at NTNU. We took a bus from campus out of the city, and into the semi-wilderness. We stopped briefly to walk around and look at the site of the 1997 Nordic World Ski Championships, and I took a few pictures that you can check out in the pictures post. Very cool spot.

We got back on the bus and moved on to the next destination, the main event: the hike. A beautiful several miles in the woods, talking with interesting new friends. This was what I wanted, what I came to Trondheim for - snow, a cabin, and people very different from me and the people I know.

We ate a traditional Norwegian oatmeal with cinnamon and waffles at the cabin at the end of the path, and explored a little bit of the surrounding area. While there hadn’t been any snow recently (This has apparently been the worst winter for snow in 40 years), the surrounding forest was replete with ski trails, and quite beautiful. We lit and released sky lanterns (if you haven’t seen these or made them, you’re missing out, so look them up!)

We waited for it to get dark before we walked back - not that we had to wait long - and lit our way with procession torches, which was beautiful in another way. All in all, it was a magical day, and it holds the promise of many magical days, spent surrounded by beauty.


Well, that about covers up to through moving in and Orientation, which is what I planned to cover here. I will have to wait until a different post to talk more about Norwegian culture, as we were told about it and as I have experienced it. I hope to follow this post up soon with one about the first week or so of classes, but as you might be able to tell, I struggle to get the posts out of the draft box and published on any sort of schedule. Anyway, I’ll try to do better for you. Thanks for reading, and remember that I love hearing from people, since I miss them, so take the initiative and message me! You won’t regret it! 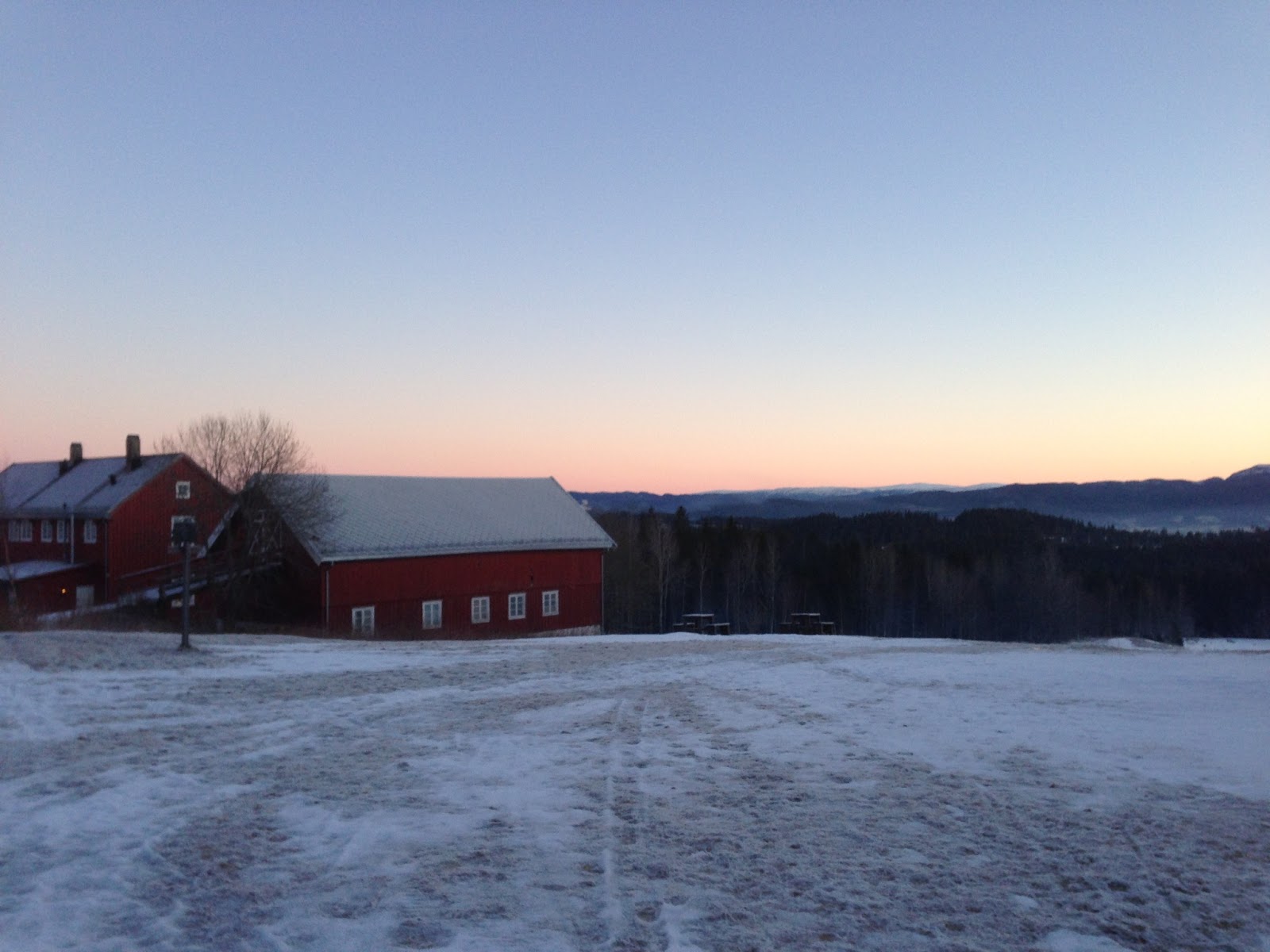