This post is from Jan 15, 2013. My views have probably changed since then. If it's about technology, any code is probably broken by this point.

I am still in catch-up mode here on the blog, I have been trying to get courses figured out, and haven’t sat down and wrote about last week. More on now later; now, then.

I left of with an almost reassuring account of finding places to stay for a few days before my apartment lease kicked in, and with some complaining about prices here. I have been doing lots more than sleeping and buying things! Mostly walking around, and, just for you, taking pictures. I am splitting up the text posts from the pictures posts, so watch out!

Another thing I did lots in the first few days was fall. The sidewalks and paths and roads in the city accumulate snow, the snow melts with rain and traffic, and the subsequent ice becomes a death-trap. Not being accustomed to these conditions, I fell many times. At first, I was innocent of all blame for slipping - I wasn’t used to looking for ice, I was lost or distracted, sometimes dragging and carrying my luggage. I must have been the image of winter tourism in Trondheim, falling over my luggage, trying to find out where I was going on the distinctive pink-bordered tourist map.

Later, the falls were due to arrogance. To combat falling (maybe to help tourism?), the city puts small, gritty, black gravel on the streets, which, when it inevitably gets mixed with the snow and ice, provides some small amount of traction for the attentive pedestrian. After a day or so of trying to stick to the ice-free parts of the sidewalk, I began to experiment with walking on the treated parts of the ice. As it was fated to be, I fell many times more, refusing to learn my lesson despite the frequent reminders.

I feel in many ways, in this early part of my experience, like a toddler. More than the physical awkwardness of learning a new environment, I struggle to communicate with the people around me, I don’t know how to meet my needs, I am scared and frightened and dependent on other people to help me. When I approach someone at a register in a store, they speak to me in Norwegian, not recognizing me at once for the foreigner that I am. As I am, in a terribly American way, completely hopeless in the native Norwegian, I have to stop them and abashedly ask that they repeat themselves in English. Thankfully for me, English is standard in Norwegian schools, so most everyone has enough of my language to hold a functional transaction.

Like a toddler, I am learning how to navigate a new place. While enough of the institutions are familiar that I didn’t starve or freeze, so much is very different. I will write more about the cultural differences when I post about orientation - for now I will say that, while friendly and helpful, it is difficult to make friends with Norwegians.

My wonder at this new place and my excitement at my growth through the exploration of it are also childlike. While each moment is not so different from any moment at home, the shape of all the moments together is radically so. Everywhere I go is a new place to me, even if it had centuries of history engraved in its old Norse bones before white folks settled in America. The ancient church, Nidaros, next door to where I spent my first four nights in Trondheim, took 250 years to build, and has a look of austere magic. I am impressed and surprised when I think about the history of this place, where I am so new.

My hope is that for the next few months, I can keep hold of the childlike mindset. I want to grow to be more independent; to understand how people interact here, and how that interaction compares to interaction elsewhere; to explore the landscape and history and culture, and to learn about this place that seems to hold such mystery and magic. The North.

Thanks for reading, this post got more introspective! The pictures post coming soon will have fewer thoughts, and more pretty things to look at!

Next post will cover moving in and the Orientation NTNU put on for the new International Students.

You are clearly passionate and intelligent since you read this, so have an amazing day! 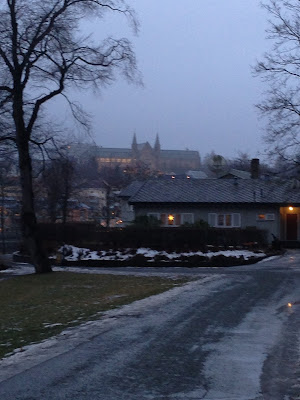 The treacherous path down to the Nidaros Pilgrimsgard. Above the hostel you can see the beautiful main building of NTNU across the river.

← Welcome to TrondheimPictures from the First 10 Days →